We Will Never Forget the Crimes in Vukovar

On the 25th anniversary of the fall of Vukovar, Women in Black organized a series of events.

November 1st 2016 we reiterated our request to the Zrenjanin and Žitište municipalities for a memorial plaque in the Stajićevo and Begejci camps (places of suffering and torture of Croatian prisoners following the fall of Vukovar). There is still no reply from the Serbian state regarding the establishment of camps and for the killing and torture of Croatian prisoner, indicating the continuity of impunity in Serbia!

We Will Never Forget the Crimes in Vukovar

On the 25th anniversary of the fall of Vukovar, we are reminding the public that on August 25th 1991, the JNA (Yugoslavian National Army) attacked Vukovar from the air, from the ground, and from the Danube River, as part of the “hell of Vukovar” which began on September 19 th 1991. At this time, people in Belgrade threw flowers before the tanks, and escorted the First Guards of the Armoured Division of the JNA in Vukovar to their destructive spree. This was one of the most shameful events in the history of Belgrade, and is covered by a vow of silence and denial!

Decisively AGAINST Fascism – Antifascism is My Choice

For the International Day Against Fascism and Anti-Semitism, Women in Black organized a peaceful action with the Antifa choir Our Song (Naša Pesma).
The action took place next to the Monument for Hanged Antifascists, on Terazije Street.

Refugees, Women in Black and the Police

You can’t tell who is craziest: the refugees, the police or those women, said a local shopkeeper. He made a cross over his chest, to express his sincere Serbian bewilderment.
He had just witnessed ten shabby Afghan and Syrian refugees walking past, escorted by ten Women in Black from Serbia, Italy and Spain, themselves escorted by ten policemen and a police car.
By the railway station in downtown Belgrade, the temporary citizens-from-nowhere are living their nomad existences in the rubble of the so-called Belgrade Waterfront construction project. The refugees loiter all day, hoping for something to happen, between the city bus yards and huge trash-cans full of boxed food that the aid workers supply on a regular basis. 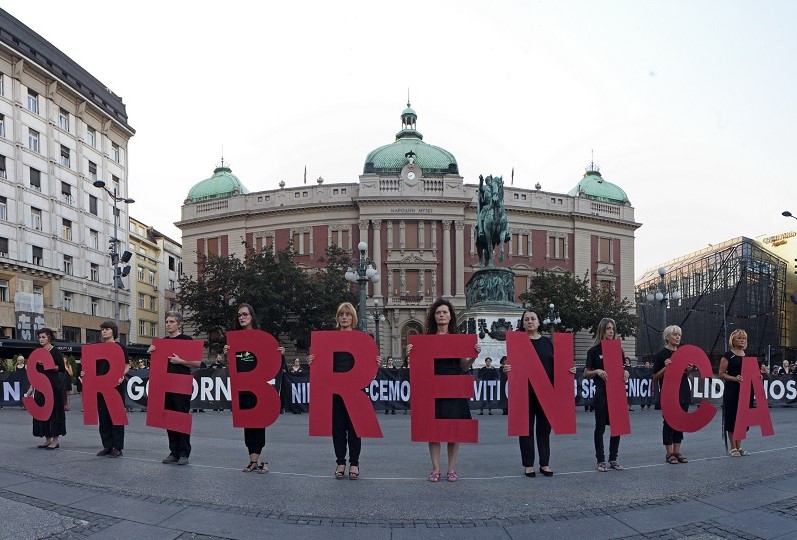 Always Disobedient!
Still on the Streets!

We will never forget the genocide in Srebrenica

At the protest following banners were raised:
- We will never forget the genocide in Srebrenica
- Responsibility
- Solidarity
- We remember
- Remembrance
On that occasion stage action "Srebrenica 8372" was performed.

WE WILL NEVER FORGET GENOCIDE IN SREBRENICA!

All for peace, health and knowledge, nothing for arms
Leskovac, May 24th 2016

On the occasion of May 24th - the International Day of Women's Actions for Peace and Disarmament, Women for Peace Leskovac and Women in Black Belgrade, with the support of Women in Black Network from Vlasotince, Nis, Pirot, Krusevac, organized feminist anti-militarist march called All for Peace, health and knowledge, nothing for arms.

On April 6, 2016., Women in Black organized a peace action in silence and wearing all black in Knez Mihailova Street, to commemorate the anniversary of the beginning of war in Bosnia and Herzegovina. Another cause for organizing the action was the unjust verdict of Vojislav Šešelj by The Hague Tribunal.

The protest went peacefully, without incidents, with a smaller number of police officers and a bigger number of media present.

There were around thirty female and male activists at the protest: Women in Black, Youth Initiative for Human Rights, Antifascist Alliance of Serbia, Autonomous Women Center.