Independent Monitoring of the Implementation of
Resolution 1325 in Serbia 2017

On December 22nd, 2017, from 1pm to 1.30pm, in Knez Mihailova Street, in the center of Belgrade, Women in Black held a peace action "Stop Occupation" in black and silence, on the occasion of the current political situation in the Middle East. 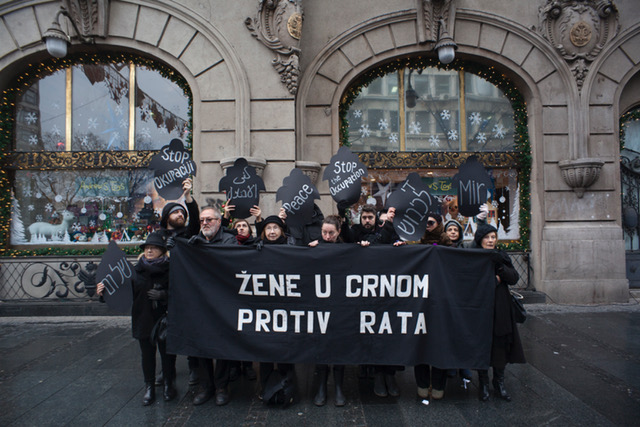 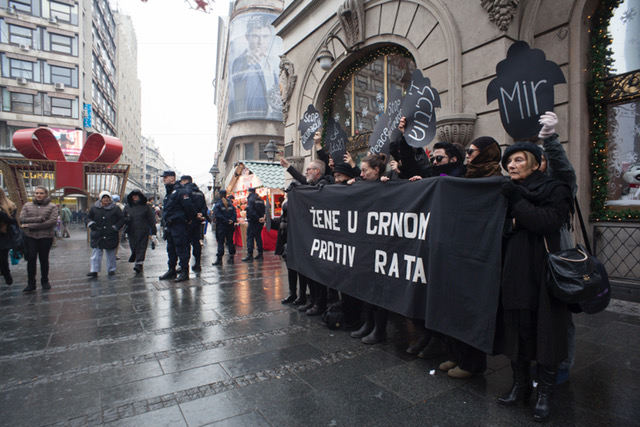 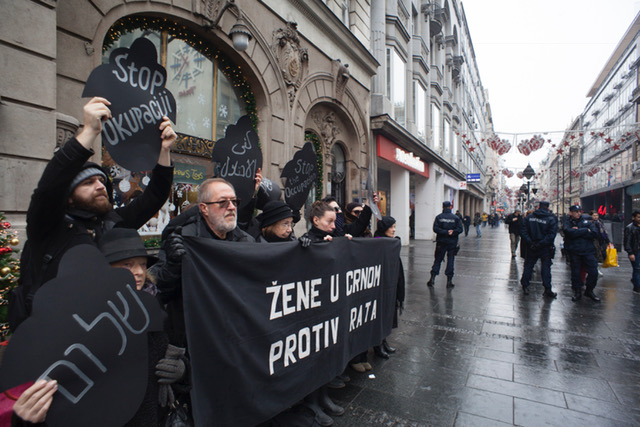 Peace action and Report on the World Peace Day

On the occasion of the 22nd anniversary of the Srebrenica genocide, the Network of Women in Black, with the support of Multimedia Center Led Art, Dah Theater, Youth Initiative for Human Rights and Autonomous Women Center organized in Republic Square in Belgrade, on 10th July 2017, a performance, in mourning and in silence “Srebrenica 8372...”.

We Remember! 25 Years Since the Beginning of the War in Bosnia & Herzegovina

On the anniversary of the start of the war in Bosnia & Herzegovina (BiH), Women in Black, in cooperation with the Autonomous Women's Centre, Dah Theatre, the Youth Initiative for Human Rights, the Women in Black's Network of Women Against Violence, Reconstruction Women's Fund, and the Association of Anti-Fascists, collectively organized a peace action where the 25 year anniversary of the beginning of the war in BiH was remembered.
The action was organized on April 6 2017 at the Republic Square in Belgrade. 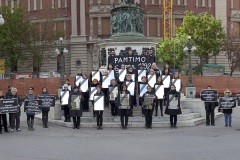 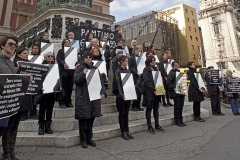 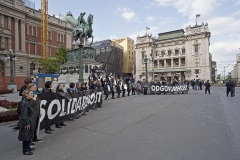 On the occasion of March 21st - International Day Against Racism, Women in Black organized a peace action "Stop racism against refugees" in Knez Mihailova Street in Belgrade, from 1pm to 2pm.

We raised the following banners in Serbian, English and Arabic:
March 21st - International Day Against Racism
Stop racism against refugees
Stop the war, not refugees
Solidarity
Brick by brick, wall by wall - to make Fortress Europe falls
Freedom for all
Solidarity with Refugees

Peace Action was attended by twenty activists. Action has media coverage and there was a police presence.

One year from the closure of the "Balkan route"

Closure of the borders: The so-called "Balkan route", which also passes through Serbia, form escalation of refugee crisis in the spring of 2015, up to March 2016, was passed by between 700,000 and 800,000 refugees. "Balkan Route" is closed at midnight on March 8th 2016, with closing of the Croatian, Hungarian, Serbian and Macedonian border for further passage of refugees. Tens of thousands of refugees were "trapped" along the route.

Women in Black, Humanitarian Law Center and Youth Initiative for Human Rights have organized a peaceful action in silence and wearing all black to commemorate the crime in Štrpci, in front of the main railway station in Belgrade on February 27, 2017 from 3:48 pm to 4:48 pm.

That was the point from which the 671 train departed on February 27, 1993 carrying 19 passengers of Bosniak nationality whom the members of the military formation Avengers, operating as a part of the Army of Republika Srpska brigade in Višegrad led by The Hague convict Milan Lukić, took out and took them to the village of Prelovo (Višegrad municipality) where they tortured them and then murdered them. Up until this day only the remains of three people have been found.

The following banners were displayed at the peaceful action:

During this action the pedestrians were given out flyers made as a train ticket with the information on this crime. The media were present at the action, as well as police security.
Around thirty people participated in this peaceful action.