We will never forget Nakba 1948

On the May 14th 2018 at Knez Mihailova street in Belgrade, Women in black organised peace action "We will never forget Nakba 1948" regarding to 70 years from the begining of Nakba (Disaster), when on the teritory of Palestine was created the state of Israel. Action was in black and silence.

Around 20 activist atended the protest. Protest was passed with increased presence of police, without media coverage. 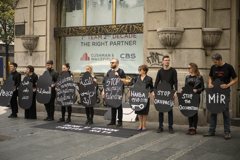 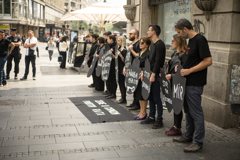 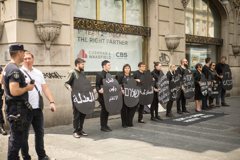 Marielle Franco was an Afro-Brazilian, a lesbian, a socialist, a human rights activist. Marielle was killed on March 14th, when she was returning home from a panel discussion on empowering young black women. She struggled to build institutional mechanisms for the protection of women's rights - especially against violence against women. She was strongly advocating the sexual and reproductive rights of women. In addition, she was an adviser to the body that worked against excessive use of military force in solving problems in poor suburbs.

The protest lasted for half an hour. Activists from other organizations (Labris organization for lesbian human rights, the Autonomous Women's Center ...) and a group of independent activists demanded justice carrying images of murdered activiss and banners with messages: Pamtimo Marielle Franco, Marielle Franco: PRESENTE !, Justice for Marielle, punishment for murderers, Justiça para Marielle, castigo para assassinos !!! To point out the cruelty of the repressive policies of racism, we carried the canvas on which it was printed-One Race, the Human Race! Since the rally was not reported to the police,due to the law, the number of activists who protested needed to be less than 20,so there was no public call for action.

After the protest of several activists went on the meeting with the Brazilian ambassador. During the talks, the ambassador of Brazil justified the militaristic measures. At the end of the conversation, she promised that the Brazilian state would do everything to find and punish the perpetrators. 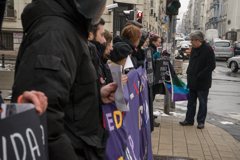