"Time passes, we age, and we cannot wait for the criminal to determine the time of his judgment"

Note from the trial of Ratko Mladic 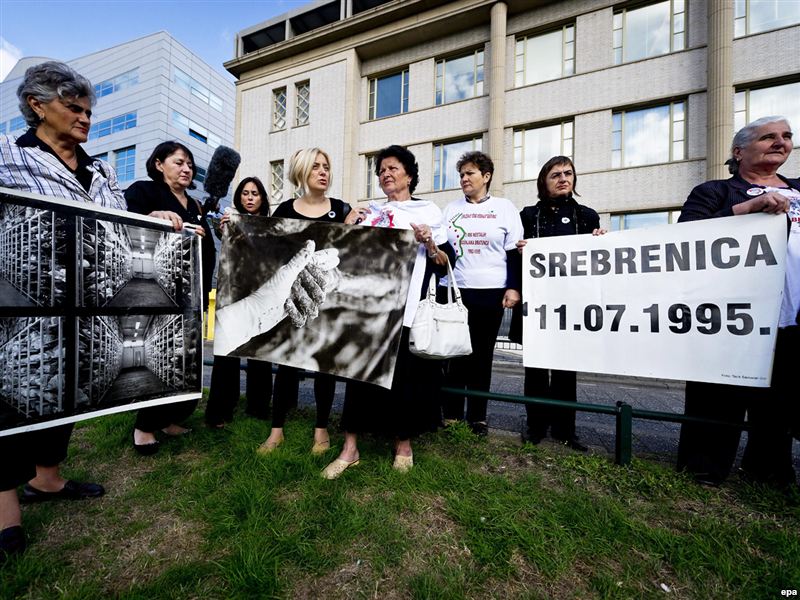 Women in Black accompanied women from Srebrenica, following their call and out of the feeling of moral duty, during the second appearance of Ratko Mladic before the International Tribunal for the Former Yugoslavia in Hague.

On the trial that took place on the July 4th 2011 it was planned for Ratko Mladic, after delay of 30 days, to enter his plea on the indictment against him, on the 11 counts that indict him for the most serious crimes - genocide in Srebrenica and 8 other municipalities in Bosnia and Herzegovina, of ethnic cleansing, persecution, extermination, murder, deportation and other inhumane acts, terrorizing, attacking civilians and taking hostages.

The aim of the trial is verdict, and, during the process, the focus is on the perpetrator rather than the victim. Such was the case this time. As a real star, accused R. Mladic comes out on stage and acts, drawing attention to his health and generational issues, and presenting himself as a victim of “odious” tribunal and the world’s injustice towards the Serbian people. Victimisation of the executioner, surrounded by the guards, who were politely pouring him the drink to refresh himself while speaking, was very difficult to the women from Srebrenica, who have remembered their loved ones, who, innocent, frightened, hungry and barefoot, had no one to protect them in July of 1995.

During the trial, R. Mladic, indicted for two genocides, was arrogantly speaking to the judges and to the women in the audience, his victims, with a cynical smile. At the same time, he was addressing the Serbian public, fully thought out, to get the message that the ideological- cultural project, whose part is also the claim of Dobrica Ćosić of is still alive. His hat - a symbol of national identity, which, before the war, replaced an antifascist symbol that he was wearing by then, is a symbol of the continuing "struggle". He refers to right-wing cultural elites and those who still deny the genocide, denying victims and relativizing the crimes. His "defiant" attitude can easily spill over to young people in Serbia who were children when the genocide occurred, but who are the ones that will continue to spread the ideology of nationalism and hatred towards those who are different, towards the “Others”.

Judge Orie well-run the trial, not allowing Mladic to make a circus out of court. After numerous violations of the procedure, judge Orie briefly interrupted the proceedings and announced that "the accused Ratko Mladic has been asked to leave the courtroom because of his offensive behaviour."

After the trial, we went with the women of Srebrenica to the meeting with the Chief Prosecutor at the ICTY, Mr. Serge Brammertz. During this encouraging meeting, he showed comforting understanding of the needs of survivors and families of victims of the genocide. He spoke about possible ways to expedite the proceedings, such as the division of existing indictment into several smaller ones, and reassured us that he would do his best to accelerate the trial and bring a verdict that would satisfy the victims.

Women of Srebrenica were once again humiliated by Ratko Mladic’s attitude. Waiting for justice, they expect from the court to continue to control Mladic’s incidents, and to do everything to expedite the judicial process, and ensure that the trial ends as soon as possible, with the hope that a fair verdict will determine the facts, turn them into a historical truth and bring (imperfect) satisfaction of victims.

Sabra, women from Srebrenica: “Not only that you killed us Bosniaks, now you are killing your own peopl...”